Spilling A Trail Of Kosher Salt, As She Went 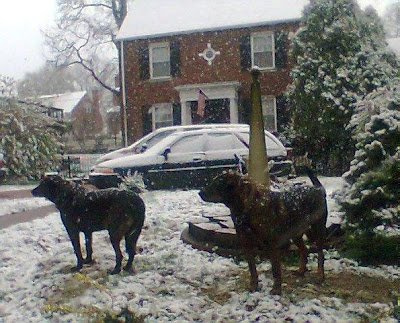 [Above: The Poowes taking in a snowy day at the Dyers' Cottage. If you don't think they're cute, you're a heartless SOB, who deserves a big lump of coal in your stocking.]

On the evening of December 18, 2009, just before a foreboding mauve-colored sky began burying the D.C. Metropolitan Area under nearly two and a half feet of snow, I was headed towards Capitol Hill along the Eisenhower Freeway, where I saw many HUGE salt trucks lined up on an overpass. These trucks were of the industrial-sized GMC variety you might see servicing a construction site, and a fellow Penn Brangler later told me they had also seen these trucks lined up along the Ike. My own mother, who'd traveled that same freeway, early Friday evening, told me she had seen the same, large salt trucks, there.

It would all make sense the next day, as the snow piled to over a foot and kept falling, when a neighbor would tell me that the D.C. government had a sand surplus--more than enough to handle a blizzard this size. More sand than all those big trucks could carry, surely.

The 3500th block of Pope Street, in the heart of hilly Penn Branch, didn't see a salt truck until December 21st, Monday evening--that's nearly two days after the storm faded on Saturday night. The truck appointed to service this tree-lined stretch of Pope Street was barely bigger than a Ford F-150--so small, your two fattest cousins would tip the thing over, if they jumped in it too fast.

From the porch of old Dyers' Cottage, where I grew up, we watched this little truck sprinkle what looked to be fairy dust up and down Pope Street--took two trips, I think. It left behind a trail of sand or salt that was every bit as unimposing as the truck that had delivered it. It looked as if a tired, old lady'd come up the street with a leaky grocery bag,..spilling a trail of Kosher salt, as she went.

For a Ward Seven neighborhood that voted overwhelmingly for the current administration, it was disappointing. It was insulting...

I've got more coming, and in typical Penn Brangler fashion, there's light at the end of the tunnel and all is tied up in a warm, positive, affirming bow. It gets better, ..and it kinda has to with the holiday upon us and all that--can't really leave you all bummed out for the holidays, can I?

The Penn Brangler is back.
Posted by Dyer at 8:55 AM No comments: