See that part on the map (below) that reads 'Territory of Columbia'?

What is the point of naming the City Formerly Known As D.C. something like 'New Columbia', if we're all still in the same, old Columbia? So far, our poll reports that there are more people, who want to name our new, non-capital territory just plain, ole, stinky 'Columbia', than anyone else.

Common sense prevailing, I think.
Posted by Dyer at 11:35 PM No comments:

A Bowl A Day ..Keeps The Rats Away!

A little water, and he's patrolling the backyard for varmints. [Photo from Petfinder.com]

The front and backyards of my mother's red-brick, Penn Branch cottage are crawling - CRAWLING - with the silliest and most adorable stray CATS, who are hard at work, catching and eating any shrew, plestiodon, squirrel, rat or mouse that comes within ten feet of the place. So, ..only once a day, ..we've started feeding these little rascals, ..knowing that the summer heat, hunting for food and occasional scraps with other cats can be brutal for them. Still, they expect so little, and they are so, so loyal, while also being decidedly independent and keeping a respectable distance, ..you really can't ask for better neighbors!

Loyalty? Ha! Try finding that, this close to Capitol Hill.

Not asking you to feed all the stray cats, east of Big Dirty! Hell no...but, be a pal, when you can, by filling up a spare bowl (not too deep) with nice, cool tap water and putting it out, where the little imps can reach it. Not so hard, right?

Mel Dyer
Posted by Dyer at 7:56 AM No comments: Holding Your Head Up In These Southeast Hills

Southeast Hills is the new title of this blog, replacing the mockingly pretentious 'Near Capitol'.

Capicostia and Near-Capitol were both very well for poking fun at the ugly trend some agents of gentrification have indulged in re-branding old D.C. neighborhoods. In the interest of spoiling that trend, I have decided to name the blog something more honest and culturally organic to the people, who keep this area going and who have made it a decent place to live - and for me, a great place to grow up. Somehow, in my rush to poke fun at all the re-branding, out there, ..I feel that I very briefly became a participant in it.

I can tell you that I sincerely regret that.

Ask most people in the wild hills of the Naylor-Dupont district, where they live, and they will tell you that they live in Southeast. They don't flinch or shrink, when they say it, either. They are proud to tell you they live in Southeast, because they have worked very hard to get here and continue to work very hard to keep it a clean, safe place to live and raise their children. I think they have earned the right to that kind of pride, and if they hold their heads up, when they talk about our neighborhoods...

So, should we all. Southeast Hills...

Mel Dyer
Posted by Dyer at 4:19 AM No comments:

You will notice a refreshing change, when you're headed west-of-river from Fairlawn, taking the off-ramp onto Kenilworth Avenue and 295. The sign pointing you in the direction of I-695 and the Eisenhower Freeway that once read 'Capitol Hill', now reads 'Downtown', ..as it blamed well should have, a year and a half ago.

I remember this being very problematic, when I first started taking Kenilworth onto the Southeast Freeway and into town, ..and still unfamiliar with the new traffic patterns, out here. Studying all of the road signs, heading Downtown, I could not help noticing that there was no signage pointing me in that direction. The only sign that came anywhere close read 'Capitol Hill', which I found a little perplexing, since I know there is actually an ENTIRE CITY, which [I swear!] lies beyond Capitol Hill! If I follow this sign, will it take me to some part of Capitol Hill, from which I can quickly and easily get Downtown or Alexandria? Will following this sign lead me to Barrack's Row, surrounded by bars and cafes that I have no interest in? When I'm rushing off to some appointment in Northwest or Crystal City, I need a sign, which assures me that I'm travelling in the right direction, ..and 'Capitol Hill' did not give me that reassurance.

Anyway, it was terribly presumptuous of the folks Downtown to assume that everything I could ever possibly need should be found on Capitol (flamin') Hill ..and to Hell with everything else. What were they thinking?

Mel Dyer
Posted by Dyer at 1:21 PM No comments:

Sunset In The Village 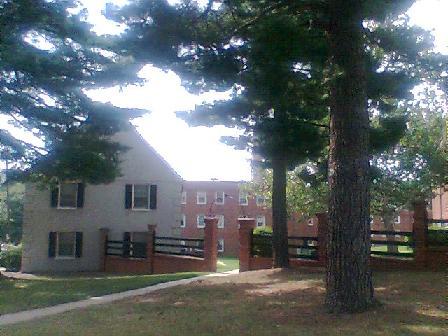 Just read that Life In The Village closed.

LITV was a River East blog that distinguished itself, with in-depth community reporting on public forums, local businesses and current and upcoming development projects, ..and it had no equal. Village creator, Veronica Davis, will likely continue her community service and activism, in and around Fairfax Village, and we will continue to be inspired by her tireless dedication to our Southeast neighborhood.

Her blog will be missed.
Posted by Dyer at 10:29 PM No comments:

The Southeast Hills Had The Navy's Back, Once

Fort Davis, which protected the Benning and Navy Yard bridges during the Civil War, is one of the historic Naylor-Dupont district's most distinguished features.  At its highest point (somewhere along affluent Westover Drive), it is 303 feet above tide and well worth having a look at, if you're passing through the Southeast Hills area.

Read the history of Fort Davis, here.
Posted by Dyer at 9:33 AM No comments:

A Hospital And Whole Foods For St. Elizabeths? Where's My Sowfeest Pentagon?!

I thought the Department of Homeland Security was moving its main headquarters (Nick Fury, Captain America, heli-carrier and all) right into the East or West Campus of the old St. Elizabeth's sanitarium. I'm not talking about a satellite office, either, ..and not an annex sharing space with the Coast Guard.

Apparently, I was wrong.

I imagined this was going to look something like a second Pentagon, out here. For the last two or three years, I've been imagining what Congress Heights would look like, with slightly ominous military choppers buzzing around it, around the clock. I've been drooling with envy over the strong local police presence and consistently reliable public works commitment that I imagined would be the result of DHS setting up shop, there - of how that would become the new normal for a surrounding community with a fluctuating rate of daytime robberies, pod-snatchings and other troubles. Everyone here, between Anacostia proper and Capitol Hill, has been talking about Homeland's big, upcoming move, east-of-river, since the (now O/B) Big Chair Coffee first opened on MLK.

So, what happened? What's this about a Gateway Pavillion opening? Nobody I talk to, over here, is talking about that. When did it happen? Now, Mayor Vincent Gray is announcing a new hospital and Whole Foods Market coming? Where's my Sowfeest Pentagon, ..yo?

No one tells us anything in the Southeast Hills area.  Clearly, I'm walking in on the credits, here, and don't know what in Sam Hill's going on.

Read more about that in the 'Housing Complex' section of the Washington City Paper
Posted by Dyer at 11:22 AM No comments: