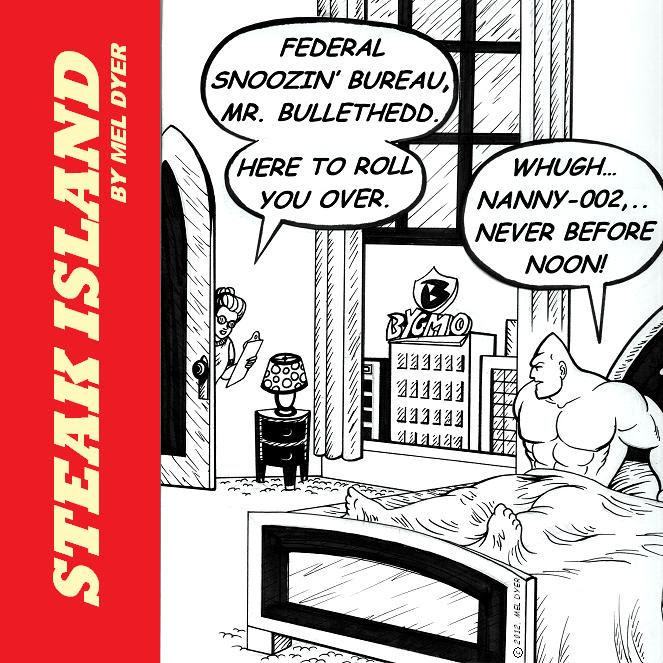 In STEAK ISLAND, the red-skinned, pointy-headed alien strongman, Bullethedd, stocks shelves and unloads trucks for the metamythically gargantuan Bygmo warehouse store. Among the denizens of Steak Island, are Bygmo's general manager, the Iron Munkee, a grumpy, living statue, a fallen health goddess and others – all brought to life in weekly, one-panel vignettes, struggles desperately ..to be liked.

Steak Island creator, Mel Dyer, is an American freelance website developer and weblog publisher, who grew up in a hard-working, middleclass, Catholic family in Washington, D.C. Between them, his parents privately operated two successful small businesses, a print shop and a detective agency, for nearly fifteen years, while holding down full-time jobs. At home, the political views of his mother, a right-leaning liberal, and his father, a pro-labor conservative, inspired strong populist patriotism at an early age that endures, today, ..and he is very proud of his Southern American heritage.

Bullethedd, like the author, is very much a creature of populism. Steak Island springs from all of that.

Mel Dyer presently lives in the Capitol Hill area of Washington, with his coyote-hatin' Goldiweiller, Kirby. He is an active member of the Kiwanis Club of Capitol Hill.
Posted by Dyer at 7:11 AM No comments:

This will be my last editorial as a community blogger ..and as the publisher of what might have been (with better marketing) a great D.C. blog, Capicostia Heat.  It has been my experience, as a writer and a man, that, sometimes, the grandest things are best said simply and sincerely, ..with authenticity.  So, there you have it.

There were times, just a month and a half ago, during the disastrous aftermath of the rogue storms that devastated the D.C. area, that it seemed my mother's Penn Branch community had been entirely abandoned by the District of Columbia.  Penn Branch was left sitting in the dark with no power, no visible police presence (police patrol cars, etc), in the middle of the worst heatwave of recent memory - temperatures of one hundered and one degrees.

To we Branchers, who, for DECADES, had seen full restoration of power and lights, within hours of a crippling storm, ..the heat and darkness were horrific enough. To those of us, with disabilities, limited mobility, senior citizens with debilitating conditions, these three days seemed pretty hopeless.  For that first three nights in total darkness, as I patrolled the dark, storm-razed streets of Penn Branch in my mother's ten-years old minivan (my faithful, coyote-hatin' Goldiweiller, Kirby, at my side), I was so proud and grateful to see, in passing (with aid of flashlight) that I wasn't alone, out there - that other devoted Branchers were doing the same.

Nothing epically heroic about any of it.

I drove through the neighborhood once or twice a night, with absolutely no idea what I was doing or what to expect ..and knew that. No one I encountered driving those dark streets for three, terrible nights were 'playing cop' or expecting medals and a parade to be waiting for us on the other end of this mess. We did what we had to do, out of loyalty to those Branchers, who'd stood watch over us, as we grew to adulthood (on our streets AND at city hall), ..and out of love for this great neighborhood, Penn Branch. We did it, because, in our eyes, we were on our own, and we had no other choice - not because we thought we were special, in any way.

Not because we thought we were 'heroes'.

With no power and, seemingly, no police cruisers routinely driving through to ward off predatory criminal opportunists or wild animals (feral dogs and roving coyotes), Penn Branch was in the worst shape I had seen her in my entire forty-two years. It was only after driving through other parts of Capicostia (the Naylor-Dupont district) and over parts of Capitol Hill, where I saw PEPCO trucks, police patrolling the streets and lights ON - only after I compared our situation to another neighborhoods' - I decided that maybe Penn Branch could do a little better.

With another heatwave on the horizon and PEPCO telling us we'd be without power for the rest of the week, I called Councilwoman Yvette Alexander's office.  Though Councilwoman Alexander (also without power, at home) was too busy rounding up the cellphones of her Ward Seven neighbors and charging them all at her office in the Wilson Building, she was right on top of our complaint, ..and, by the end of the DAY - not week...DAY - I saw patrol cars on the streets, PEPCO trucks and tree-removal crews working throughout the neighborhood ..and, finally, LIGHT, air-conditioning [Amen!] and power fully restored.  To Councilwoman Yvette Alexander's swift, reassuringly thorough response to this disaster, ..and with no mention of the dark, infernally hot, powerless house waiting for her on the hill, I say, with simple, sincere gratitude...

Alexander's simplicity, clarity and authenticity are rare qualities to be found in the District, where opportunism and phoniness seem, as if gushing from every crack in the sidewalk! She is a political force to be reckoned with, no stranger to Downtown politics, and, in spite of all that, ..Yvette Alexander is a Brancher in the grand, simple, straight-forward tradition - no Washington phony, here. When asked a policy question, even a simple one, this lady isn't afraid to tell you she might not be as informed as you think she should be, ..but is intuitive enough to tell you she's focused, like a laserbeam, on something of equal or immediate importance to your community - followed by the requesite invitation to call her office about it.  The Dyer Family likes that!

There are those among us, who think Alexander has been [Heard it with my own ears, and I still can't believe it!] too 'civilized' in her dealings with what often, for River East, seems like an adversarial City Council.  Alexander, however, understands that more Downtown battles will be won by getting some revenue-generating retail or something of civic significance at Penn Branch Center, ..than with chest-beating and saber-rattling.  Alexander, without whining and in true, gritty Brancher fashion, treats these remarks like the slickly veilled sexism they are; dealing in political courage and authenticity, ..she ignores them.

As Penn Branch enters the lean, ugly days this blog has been predicting, since it launched in 2008, I am comforted that this very principled young woman stands between us and the inevitable challenges on the horizon.  Thank you, Councilwoman Alexander, for all you have done and continue to do for Penn Branch and the rest of Ward Seven.

With that said, this community blogger, after four-plus years on and off (mostly off) the beat, ..retires his keyboard, one final time. Capicostia Heat, grateful for years of support and encouragement from all over the Naylor-Dupont district, will fade into the twilight.

Mel Dyer
Posted by Dyer at 5:14 AM No comments: