More Beltway Beauty Than We Can Handle! 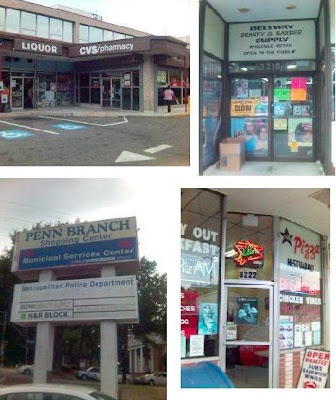 (Originally published, July 15th, 2009)
She sits at the corner of Pennsylvania and Branch Avenues, this brick and concrete goddess. Our Penn Branch. She sits there, with a mouthful of meatball subs, twinkies and Cool Ranch Doritos and washes it all down with a Colt 45. She sits there, fixing the one good eye she’s got left on you, as your car makes a mad rush for the John Philip Sousa Bridge.

I cannot honestly say that I remember the last time I wanted to visit Penn Branch Center, the prehistoric strip mall at the corner of Pennsylvania and Branch Avenues, for anything, ..and I don’t know anyone else, who does, either.

The retail section is pretty small, but not uncommonly so for a Southeast D.C. strip mall. Nearly as large as its anchor store, the CVS Pharmacy, is a beauty supply store smack in the middle of the mall. Just to the right of it, is the Star Pizzeria, which, in spite of its longevity at PBC, speedy service and GREAT double cheeseburgers, hasn’t really been a pizzeria, since the late 1970s. To the left and a few doors down, was Sabin’s Records, a discount records, tapes, CDs and lottery ticket retailer - now ‘CLOSED’. At the Center’s west end, off the corner of Pennsylvania and Branch Avenue, are a Subway sandwich shop and a Wachovia Bank.

Once, the back of Penn Branch Center featured a sensibly sized Safeway, in a time before supermarkets (to compete with malls) blew up to the size of baseball stadiums. Now, there really isn’t anything back there you’d ditch a happy hour to get to. The D.C. Metropolitan Police Violent Crimes Unit, a satellite office for the D.C. Municipal Center and a VERY GOOD cleaners are all very useful to have close by…

But, can they make you a margarita?

Grill you a round of porterhouse steaks for the guys on the blankety-blank team?

Pour you a cup of hearty Columbian coffee?

And why is that important?

Pubs, diners and cafes give people a sense of community - a collective ease with one another. It’s a chance to figure out what we’ve all got in common ..and to gossip about the folks we can’t quite figure out! In my opinion, it’s a breeding ground for a healthy sense of tribalism - that collective self-awareness, out of which a culture grows, is defined, strengthened and proudly celebrated by the group. Without these places, great neighborhoods can become bedroom communities - culturally dead, socially disconnected and unprepared to address challenges to the collective well-being of the people, who live in them.

Am I saying Penn Branch is culturally dead or disconnected? Of course not, ..but, we’re lucky.

I can honestly say that, in spite of its shortcomings, which are LEGION, Penn Branch Center has been a good neighbor, ..and with the upcoming and long overdue renovations, it can only get better. It’s got a hot sandwich ready, when you’re too tired to cook dinner. It’s got your prescriptions waiting, after a much dreaded doctor visit. On occasion, it’s even got champagne on hand, ..on a shelf, of course. That’s a good neighbor, my friend.

You want cocktails, Brangler? Bring your own.