"Artista. Intelecto. Periodista guerrero. We need more young writers like this, my friends..."

I once used those words to describe a dedicated journalist, whose understanding and whose substantive and investigative reporting on complex D.C. issues, like poverty and gentrification, has been truly inspired and will be sorely missed on this weblog network.

I once wrote that "anyone calling themselves a journalist in a city as diverse and (often) divided as Washington, D.C. will do well to follow Carlos In DC's lead" and that, amidst "so much routine criticism of the blogosphere by established journalists and politicians, if you are not reading Carlos In DC, you are missing a fine example of how consistently relevant weblogs can truly be."

For that reason and too many others to name here, this Brangler is a follower of the journalism of Mr. Carlos A. Quiroz, today, and will continue to be a follower of his work, now that he has left Blogger.com to continue his crusade on WordPress.com, at the location below...

At the time that I was first introducing myself to the D.C. Blogosphere, Carlos Quiroz, whose work on Carlos In DC I had long admired, was the first blogger of Hispanic heritage to encourage my work, and, as a grandson of Mexican migrant workers, I was moved by that. There was a time not so long ago, when I was considering shutting this blog down, altogether, that I reached out to Mr. Quiroz, and he embraced me as a friend and a fellow journalist. Mr. Quiroz encouraged me to keep writing and, with no regard of some impending competition between us, has since generously shared his news resources with me and other fellow bloggers, that our work might be as well informed as his.

He is a good man and a friend to this entire city, ..and we are all the benefactors of his insight, his tireless dedication to justice and truth, and the gift of his work.

For quite some time, following Mr. Quiroz's example, I have diligently continued to publish this blog, in spite of inclinations not to.

Overwhelmed by my own devotion to truth, I am very disheartened by the circumstances of Mr. Quiroz's departure from this network (explained here).

Don't forget to join the crusading Mother-Of-All-DC-Blogs, 'Carlos In DC' at its new location, here.

[Second Edition]
Posted by Dyer at 1:24 AM No comments: 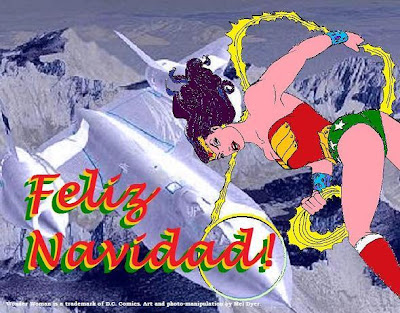 A More Visual and Lyrical Nadia Ackerman Experience For 2011?

No that is NOT David Bowie!

Check out the 80s revisionist profile pic on Nadia Ackerman's Official Facebook Group wall! Not at all the tone I'd expect from the mistress of earthy, urban art village sublime and acid jazz undercurrents, ..but, I love it. The new biscuit, A Little Moment, is chock full of depth and haunting inspiration, chillingly edgy in some places and sensually cocoa-warm in others, ..and if this kind of duality or mutability is any indication of what Nadia's upcoming website is bringing, we're in for a treat.

I honestly tried to find some clever, exploitative way to use "Hang Me Out To Dry" or something from it in this post, since it's lingering in my head, anyway. Give me time, I'm sure I will.

For those of you completely in the dark about all things Nadia, thumb through your mental rolodex for a funky, but playful, acid jazzy rendition of Dean Martin's hit, That's Amore', currently playing on the UPS commercials ..AND check out her official YouTube channel for more of her way too addictive ear-crack tracks!

[Second Edition]
Posted by Dyer at 8:44 PM No comments:

Get ready for a ground-breaking, NEW blog, called And The Autism Thing, written by my brilliant and dynamic hermanita, Shielda Dyer! Shielda is a grown woman living and thriving with autism, who has been keeping daily journals for nearly an entire year, ..only recently sharing her experiences online. Sometimes surprisingly insightful and always brutally honest, she is very committed to continuing her work and bettering our understanding of what living with autism is like.

And we, her family, are all very proud of her and couldn't be more excited.

If you have not followed Shielda's blog before, you can find it at its new location here, right here.

Mel Dyer
Posted by Dyer at 2:46 PM No comments:

A BID For Disaster? Some Thoughts...

I predicted trouble on the horizon for Penn Branch, just a few months back.

In spite of the fact that the good folk of Penn Branch are working very hard to feed their families and struggling to keep a roof over their heads, I fear a greater struggle may be ahead for us.

As Washington, D.C. descends further and further into the dark future of revenue-creating gateway communities rising, east of Anacostia, ..and the emergence of 'Business Improvement Districts' (or BIDs), west-of-River, I fear stable-but-static neighborhoods, like Penn Branch, will see the quality of their services (power, police, EMS) go down. Unlike Penn Branch, the BIDs, according to DC.gov's Business Resources page, "collect a 'self tax' from property owners to provide services and programs to the entire BID...cleanliness, maintenance, safety, promotion, economic development, and other collective business issues", ..and all those services and amenities will have to be taken from somewhere. Here's where the trouble begins.

What kind of priority will City Hall give Ward Seven's request for fourteen more police officers on our streets, if our neighbor, Capitol Riverfront, fully loaded with revenue-creating retail (movies, shops, etc), upscale condos that we don't presently have, wants to bring those police officers to their neighborhood?

I fear the problems on the horizon for Penn Branch will be so directly related to the BIDs (presently Navy Yard/Capitol Riverfront, No'Ma, Georgetown and others) and the civic resources they command that some of us will be tempted to move out, if our leaders do not soon address this issue.

That's not a criticism of Councilwoman Alexander; nor is it a criticism of the dedicated firemen and law enforcement professionals, presently working in our communities. However, ..without sufficient funding of resources and personnel, we know they can only do so much, and that leaves us on our own, in some respects.

So, watch yourself out there, Brangler.