Spare The Sharks And The Crocodiles...Spoil The Child!


I just saw, for the second time, the most facinating and INSPIRATIONAL film on LINK TV, ..and it is ALAMAR, by Mexican filmmaker, Pedro González-Rubio!

In the film, we a fisherman raising his son, on and beside the ocean. We see a father, who involves his child in the immediately relevant work and economy of their family, ..giving his son a TRUE sense of self-esteem, ..in ways an endless string of meaningless, irrelevant, organized activities (Ancient Tibetan basket-weaving, hip-hop yoga, Israelli bagel-painting, etc) NEVER could.  We see a father, who plays in the natural world with his son ..and a child, who never stops being excited about learning. We see a child, who knows his place..and, trusting that it is a cherished, loving and protected place, has no need to constantly and wastefully question and challenge authority, ..growing up without the subsequent uncertainty, insecurity and life-crippling anxiety that so many of our American kids are experiencing (with the highest suicide rates and violent behavior, than ever before).

Suicide, according to Centers for Disease Control, is the THIRD leading cause of death, among young Americans, ages ten to twenty-four years old. That is crazy ..and it is unconscionable.

With all the freedom, leisure and privilege we see so many American parents giving their children - encouragement to think of them as a best friend (as much as parent), permission to call them by first name, to question their every decision, to challenge the authority of teachers and school administrators, unsupervised time at the mall with friends, enrollment in a string of fun, organized activities, expensive clothes and toys...

Why, why WHY are our children SO unhappy?!

In Alamar, we see a devoted father, who, through work and play, gives his son's life order and the value of commitment, ..and a child, who is genuinely HAPPY with his simple, meaningful life. He gives his son's life something sorely missing in the lives of today's young Americans, ..and that's simplicity. It is a simple, beautiful life, as surrounded by water, as by LOVE.

Pedro Gonzalez-Rubio's ALAMAR is a great film for fathers and uncles to see, as much as for mothers to understand what makes willful, curious boys into good, strong men. Blending real-life people and places with improvised situations, it is a docudrama and can't be called a blueprint for raising perfect children, ..but, it might point us to something we seem to have lost, here in the West (particularly, in America).  Alamar is a movie that might show us how we can make more relevant, life-long contributions to our children's lives that I believe will benefit our societies.

Mel Dyer
Posted by Dyer at 8:55 AM No comments: 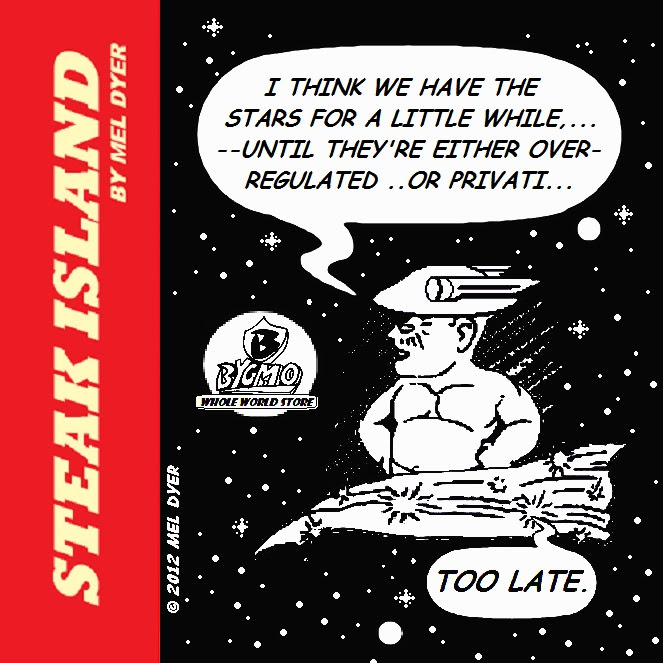 HAPPY NEW YEAR TO YOU!
Thank you so much for all of the encouraging e-mail and just for looking us over, in 2012! Coming next week, ..2013 begins with more Bullethedd, Iron Munkee, Twinkly Blanket (above) and BRAND-NEW, quirkier-than-ever Steak Island vignettes.

See the best of 2012, by visiting the 'Archives' at Bullethedd.com