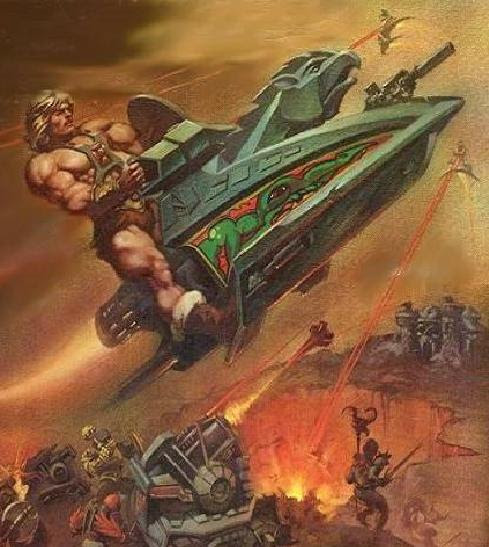 *He-Man knows how to handle a few barbarians at the gate, and so does Penn Branch. I hope.

The delay in development at our delightfully decrepit Penn Branch Center, at the corner of Pennsylvania and Branch Avenues, is very frustrating to me.

Though, in mere days, it will have been an entire year since construction was to begin on our shopping center, nothing resembling upgrades and infusions of new, dynamic retail has been initiated. Check the websites of the Penn Branch Civic Association website (on your left) and of ICG Properties, and you will not find news of any significant developments for PBC.

We have THREE gateway areas developing in the River East area, each fully-loaded with upscale condos and retail, and I worry Penn Branch, virtually unchanged since the 80s, will soon fall behind in how efficiently the city delivers vital services. With the explosion of commercial and residential development on Martin Luther King Avenue, Howard Road and coming soon to Barry Farm, generating tax revenue for the District that Penn Branch cannot match, I do not see how our community will keep its footing with the Public Works people, downtown.

When the next hurricane or really, really bad thunderstorm or blizzard knocks out the power on Carpenter Street (our main artery) and my mother's stretch of Pope Street, and we are waiting a week or longer for restoration, while Uniontown Anacostia is miraculously lit up like Nationals Stadium, within a few hours of suffering a power failure of its own, ..I think Penn Branch will recognize that its once prized position on this side of the river is a thing of the past.

I don't want to entertain, in a neighborhood with so many elderly and retired citizens--some of whom, live with great health-related challenges--what kind of problems the gateway-related changes will create, with respect to police and emergency response. This could prove a life and death situation.

Heads-up, Fairfax Village. I have a condo, there.

This [Brancher] is worried, and I think all of us in Penn Branch should be worried. I think we need a big, chalk-white government monolith, where PBC's parking lot presently is, to keep us on the map.

It took me years to understand why my Penn Branch neighbors so adamantly fought the installation of a Burger King and other Big Retail in Penn Branch. They werer protecting our neighborhood from high taxes, crime and other bumps in the road. I am not so sure how long we can afford to lockout significant development with the consequences for not being compettitive, dire and life-changing consequences, on the horizon.

*He-Man is a trademark of the Mattel Corporation.
Posted by Dyer at 7:29 AM No comments:

My movie review blog at StudioJoeMovies.blogspot.com, after a year of virtual neglect except for spot-on reviews of the movies, A-Team [Loved it!] and Prince Of Persia, has taken a final bow into the twilight.

I want to thank Joe's single follower, my blogger Obi-Wan, Carlos Quinoz of CarlosInDC, for his defiantly optimistic support. If you aren't reading his blog, you're missing a refreshingly unpretensious source of politics, world news and local cultural event reporting unparalled by a single journalist.

So, get over there, already! What do you need--an invitation? Why I oughta'...

I had big plans for Studio Joe and Joe-inspired merchandise and working with an old writer bud of mine from college. Never quite found the time or will to give this project the attention it deserved. Believe me; Joe will miss you, but not nearly as much as I will miss him.

Get ready for a new blog soon to be launched from this account, called I Want You To Know, written by my younger sister, Shielda (our 'empanadina') Dyer. Shielda is a grown woman living and thriving with autism, who has been keeping daily journals for nealy an entire year; now, she'll be sharing those journals, sometimes surprisingly insightful and always bruatlly frank, with you online.

Ignore The Buzz, Nothing New Coming To Penn Branch

My Brangler spirit may be running a little low, right now.

Exactly a year ago, in October of 2009, several reliable sources told Penn Branch and surrounding residents that construction was to begin on our weary old tomb of a shopping strip, Penn Branch Center, which is basically a big piece of crap that's been falling apart for the last twenty or so years. We've got sleepy, hum-drum retail that forces Penn Branglers to go spend our money in other communities, making them more economically viable, while our own neighborhood fades deeper into civic irrelevance with City Hall, and I was really looking forward to the end of that.

But, the ending never arrived.

In the meantime, Minnesota-Benning (Bennesota) and even Fairfax Village (where I have a condo) are witnessing the beginnings of exciting changes in their respective business districts, while Penn Branch, still the host of lots of dependable, law-abiding middle class tax payers, stays drearily and abysmally the same. Not poor or crime-ridden enough for any politician to save from itself with miraculous infusions of new development, while also not economically dynamic enough to throw our weight around like Capitol Hill, No'Ma, Georgetown or Spring Valley. Basically, that means we'll never see what used to make Penn Branch such a GREAT place to live (movies, restaurants, ice cream shops, pet stores, etc.), when I was a boy, come back to us.

The nearby Hyland Theatre, now housing a daycare center, will likely remain a big, ugly holding cell for rugrats. Maybe, it'll get another dollar store. Whoop-frakin-ee.

The old High's Ice Cream at PBC will remain a credit union or whatever it is.

The old Hot Shoppes restaurant, where my mother once worked (the first Afro-American to do so), will remain a laundromat. Honestly, it breaks my heart, every time I drive past that place. It really makes me so angry, I'd almost rather see it vacant or torn down.

The CVS Drugstore, which used to be a Leader's Drug that had its own DINER inside, will stay just another generic, chain convenience-store/pharmacy. I would take my greasy, little drugstore diner, where my grandmother and I used to plan our ritual Saturday trips into town--with its juicy cheeseburgers, fries and strong hot coffee--over a Starbuck's Coffee any day of the week.

The Subway Sandwich Shop, once a handsome, wood-panelled restaurant-by-day and cocktail lounge-by-night, will remain a very well-run Subway, ..though still too much a fastfood franchise for National Harbor.

I am convinced, and I don't have any evidence to verify it, that we're just not getting the old Penn Branch back, and, after all of the buzz and speculation of last year, I am truly pissed about that. I am so angry about it, I honestly don't know what this blog is about anymnore.

I feel really screwed, and I'm not sure by whom.

It's sad, but, likely true, that there is no new, compettitive, development coming to Penn Branch--just more talk, more promises and more studies by rich, urban-planning consultant firms. We've just been jerked around, quite enough.

The above link is from March of 2009, chatting up the big development coming to Penn Branch. Yes...the development that never got here.

Mel Dyer
Posted by Dyer at 2:56 AM No comments: