Yes! Penn Branch has an urban legend. That of the Big Bird Witch or Hawk-woman, who haunts our wild, emerald hills...

If you're over 35 and grew up in the Southeast D.C. neighborhood, Penn Branch, in the mid-1960s, ..you've probably seen or heard of this creature, at one time in your life. You probably thought you were imagining things ..or that it was just crazy-talk. You may have even heard that it had a woman's head and white, bulging eyes, ..or that it was a witch. While I don't believe that part, I've seen the creature that might have inspired this urban legend, with my own disbelieving eyes, ..perched menacingly on a rooftop, at Carpenter Street and Highwood Drive!
...One neighbor recently told me that this thing, ..which she described as a witch in black feathers, with a chalk-white face and large, staring eyes, ..glided over a backyard family gathering, back in the mid-70s, and scared the hell out of their guests! An electrician, who no longer lives in Penn Branch, but grew up in the neighborhood, recalls walking up to Highwood Drive's highest point - and not far from where I saw that turkey vulture, a few years ago - when Big Bird, as his friends called it, swooped down, low enough to send his teenaged friends running for cover, ..before soaring back into the afternoon sky...
Hawks fly over Penn Branch, all the time, now - winter, spring or fall...doesn't matter - and, while a majestic thing to behold, I have not seen one that I would mistake for a monster. Comparatively speaking, this bird has to be a little bit larger, than a hawk, and the turkey vulture that I saw, firsthand, on Highwood Drive, and have recently heard about from neighbors, more closely fits the description of our quasi-mythical beast...
And the rest is legend.
I'm really, really sorry that I'll probably never see this bird...the poor animal's got to be long dead, by now. If you've ever seen the Big Bird Witch or Hawk-woman ..or know someone, who has,.. please, please, puh-leez share your stories with us, right here on the blog. We'd love to hear from you.
Anyway, i-iiittt's real...sort of. It's also quite sociable, apparently. Have a look at this Post article from 2014.
[Excerpt from 'Urban Legends: The Hawkwoman Of The Penn Branch Hills']
Posted by Dyer at 2:34 PM 3 comments:

Part Two of 'The Drive-by', the second episode in our CAPICOSTIA HEAT video series, takes you back to the streets of Washington, D.C.'s historic Naylor Dupont district ..for an up-close look at the dark, urban labyrinth, between Anacostia and Capitol Hill! This brief tour of Seven Bee, shot in 2012, covers Good Hope Marketplace, Anacostia Park, the Randle Highlands, Fairlawn and rare footage of the now-demolished Skyland shopping center.

What happens, ..when the gritty struggle for survival in this no-man's land reaches its breaking point? Capicostia Heat is back!

Capicostia Heat: The Drive-by, Part One

CAPICOSTIA HEAT is a video series that will take you straight to the streets of Washington, D.C.'s historic Naylor Dupont district, to talk to the people, who live here. I've just finished editing 'Part One' of a brief video tour of Seven Bee, shot way back in 2012. Covering Dupont Park, Fort Davis, Fairfax Village, Hillcrest, Naylor Gardens and Fairlawn, it is one of the most comprehensive looks at our River East neighborhoods that you will find, ..and here it is.

Spare The Sharks And The Crocodiles...Spoil The Child!


I just saw, for the second time, the most facinating and INSPIRATIONAL film on LINK TV, ..and it is ALAMAR, by Mexican filmmaker, Pedro González-Rubio!

In the film, we a fisherman raising his son, on and beside the ocean. We see a father, who involves his child in the immediately relevant work and economy of their family, ..giving his son a TRUE sense of self-esteem, ..in ways an endless string of meaningless, irrelevant, organized activities (Ancient Tibetan basket-weaving, hip-hop yoga, Israelli bagel-painting, etc) NEVER could.  We see a father, who plays in the natural world with his son ..and a child, who never stops being excited about learning. We see a child, who knows his place..and, trusting that it is a cherished, loving and protected place, has no need to constantly and wastefully question and challenge authority, ..growing up without the subsequent uncertainty, insecurity and life-crippling anxiety that so many of our American kids are experiencing (with the highest suicide rates and violent behavior, than ever before).

Suicide, according to Centers for Disease Control, is the THIRD leading cause of death, among young Americans, ages ten to twenty-four years old. That is crazy ..and it is unconscionable.

With all the freedom, leisure and privilege we see so many American parents giving their children - encouragement to think of them as a best friend (as much as parent), permission to call them by first name, to question their every decision, to challenge the authority of teachers and school administrators, unsupervised time at the mall with friends, enrollment in a string of fun, organized activities, expensive clothes and toys...

Why, why WHY are our children SO unhappy?!

In Alamar, we see a devoted father, who, through work and play, gives his son's life order and the value of commitment, ..and a child, who is genuinely HAPPY with his simple, meaningful life. He gives his son's life something sorely missing in the lives of today's young Americans, ..and that's simplicity. It is a simple, beautiful life, as surrounded by water, as by LOVE.

Pedro Gonzalez-Rubio's ALAMAR is a great film for fathers and uncles to see, as much as for mothers to understand what makes willful, curious boys into good, strong men. Blending real-life people and places with improvised situations, it is a docudrama and can't be called a blueprint for raising perfect children, ..but, it might point us to something we seem to have lost, here in the West (particularly, in America).  Alamar is a movie that might show us how we can make more relevant, life-long contributions to our children's lives that I believe will benefit our societies. 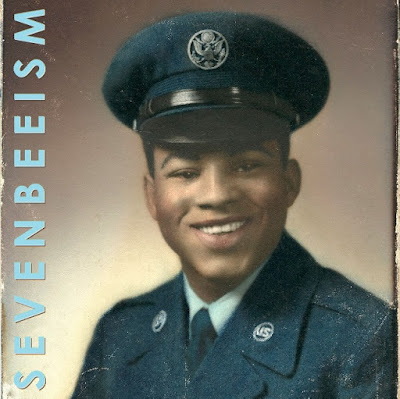 Seven Bee's Laughing Airman, ..my Uncle Stanley!
In his life, he was a warrior - a veteran of the Viet Nam War - a scholar and an artist, and he was always there for the people he cared about, when they needed them.  In the 1970s and 80s, he worked, side by side, with a Penn Brancher of long-standing - the late Mrs. Barbara Jean Harvey - in D.C.'s Department of Mental Health, bringing economically challenged citizens closer to the psychiatric care and social services that they so desperately needed to live. After living half of his life in Northwest Washington, he eventually settled into a small house in Marshall Heights and frequently visited us - me, his nephew, his niece, his sister (my mother) and our Coyote-hatin' Goldiweiller, Kirby [RIP] - and we will always remember how much laughter and wisdom he brought us, ..right here in the Naylor Duponts.
I think this photo captures the enduring pluck and ambition of the generation that settled in ANC-7B, back in the 60s! They gave us so much - family values, self esteem, safe, clean streets and the optimism to keep all of that going. We live in a more hopeful, optimistic and proud place, because of them.
Their optimism - Sevenbeeism - keeps us flying!
Where would our community be, today, without them?
[Second Edition]
Posted by Dyer at 9:28 AM No comments:

Who Do We Think We Are? 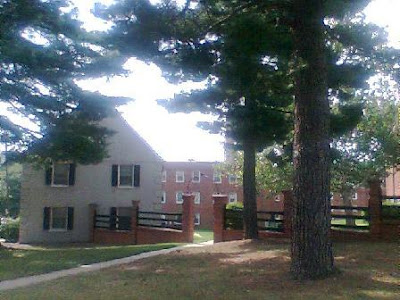 Just another day in that fabled, urban war-zone...Anacostia? So scary. Stay away.
Who do we think we are?

There are perfectly sensible people living along Pennsylvania Avenue, between the Sousa Bridge and the Southern Avenue D.C. State Line - in Naylor Dupont, ANC-7B - who think that they live in as colorful a scattering of socially and politically diverse neighborhoods, as to be found, anywhere else in Washington. They think they live in neighborhoods, called Greenway, Penn Branch, Fairfax Village, Hillcrest and Skyland, ..in spite of the fact that so many Washingtonians, west of the Anacostia River, persist in dismissively referring to these neighborhoods, as ..'Anacostia'.

There are people living on exlusive Westover Drive, secluded in the emerald majesty of historic Fort Davis Park, where Ohio Representative, Dennis Kusinich, presently resides, who are so removed from the fabled, urban grit of Southeast Washington...they might think they're in Northwest Washington. There's no evidence that they do, but, you would understand, if you were lucky enough to wake up, where they do, ..and they've been there, perennially ignored by the Nation's Capitol, for nearly fifty years.

I am not making this up.

I remember how frustrated and angered my neighbors were by the trashing of this area's only movie theatre, the Hyland (the shell of which presently houses a daycare facility), by Southeast residents. In the 1970s, the Hyland was one of the nicer places, East-of-river - one of the places that reminded Afro-American working AND middleclass residents that they lived in a good neighborhood - that their hardwork had paid off and that the indignities of Jim Crow had not been endured in vain.

Unfortunately, there were those among the Hyland's patrons, who did not feel this way about it - who, I think, saw the Hyland Theatre, its neighboring drugstore and some of our nicer restaurants as gilded toys of an ambitious black middleclass that had abandoned them to crime, poverty and ghettos. The Hyland was not just an auditorium, but, a true movie palace, in the historical sense of that word, and these resentful people did unspeakable things in and to it, ..but, even that did not diminish the aspirations it represented.

For as long as I've lived on what D.C.'s Afro-American middleclass calls 'the Silver Coast', I have understood those aspirations to be something deeply rooted in the cultural identity of our River East neighborhoods. Many long-standing residents of these neighborhoods do not see their communities as stopping at the Anacostia River, but, as being part of the national, international and global experience that is Washington, D.C.  There's something about the way people think in Naylor Dupont - about looking out over the Nation's Capitol from these wild, majestic, opossum-infested hills - that is inherently optimistic, audacious and without boundary, ..and I consider myself truly priveleged to have grown up in the midst of it.

Who do we think we are?

It took a remarkable young lady in Congress Heights, Ms. Nikki Peele - whose tireless efforts to revitalize economic development in River East have inspired a generation - and an equally remarkable gentleman, Mr. Baxter Gee - a retired Marine, who devotes his life to mentoring youth in economically challenged River East and Hill area neighborhoods - to remind me of the hard work and tremendous sacrifices it has taken to make us who we are. We are a socio-politically diverse array of strong, defiantly proud and enduring communities, whose stories have yet to be told or appreciated. There is something special happening, over here...

And it isn't Anacostia.

[Fourth edition. This is largely excerpt from an earlier blog post, entitled 'Capicostia Is Real'.]
Posted by Dyer at 7:40 PM No comments: