LAUGHING IN THE TEMPLE OF BETTY: COMEDIENNE, GONE, BUT SHINING...FOR FANS AND FELLOW ARTISTS

Right now, I am just saddened, knowing Betty isn't out there, doing her Betty-thing, anymore, because it was pretty special...genius. For writers and artists, White's courtiers and compatriots, the starry firmament just got a little dimmer.

White had a penchant for making characters, who were unassumingly oblivious to their own absurdity...even grotesqueness, ..heart-warming and, sometimes, unforgettable. She has been, over the course of a half-century's work in movies, TV and radio, far more influential on other comediennes and comedic actors - she was certainly one of those - than we will recognize, for a long time. WANDA SYKES, one of them, surely - if Sykes isn't the lost comedy-lovechild of REDD FOXX and Betty White, I don't know who is, and her comedic genius goes, where Foxx, White and Moms Mabley ..went, boldly before it. 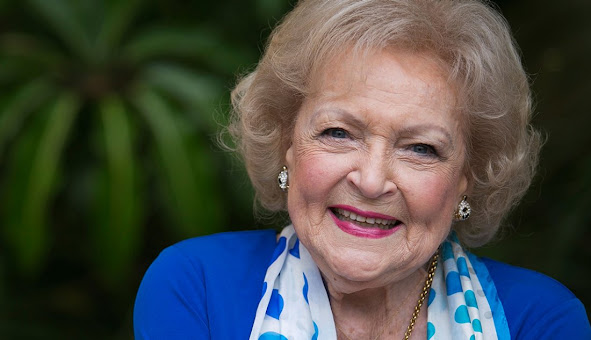 A comedic mastermind in EVERY era, here's Betty White in 'her' 2020s. (from AARP.com)

In that sense, I think we'll be sifting through the Betty White magic, in places we don't expect to find it - wouldn't ever think to look for it - for a long time, ..and we'll find, there, ..true brilliance, fearlessness and something that means 'pressing on, without stopping'. In situation comedy, talk-shows, game shows, sketch comedy, and in every medium, she made us laugh and remember her, enough to chuckle, when she'd pop up, somewhere else. Stand-up comics and comedic actors will be studying how she did that, White's artistic technique, ..if they're even a tenth, as clever, as she was.

There's a reason why today's comedic actors, like Ryan Reynolds, fan-worship, in the temple of White.

Betty White's impact on us, her audience - what we will remember of her, that makes us smile, is something else. It's so much. I won't get into, here, ..but, I'll tell you, for three or four YEARS, I had a date with four white ladies on NBC, every Saturday night - GOLDEN GIRLS - that I wouldn't have missed, for the world.

Betty White was an animal-friend and advocate, a humanist, an industry trailblazer and a comedienne. I won't make her more or less, than that, with the typing space, I have left. What she was, without embellishment, ..was more, than enough.

Bye, Betty. You were and are brilliant, ..a gift to your fellow artists - comedians, actors and writers. Thank you, for a few, sparkly, funny moments, in front of analog TV sets, ..for being a friend.

For more, on Betty White's history and impact, read the following article, on CNN... https://www.cnn.com/2021/12/31/entertainment/betty-white-obituary/index.html