Social Security Is Not The 'W' Word

Social Security Is Not The 'W' Word
One thing that today's political arguements are doing for the general public, is to help us to

understand just what Social Security is. Unfortunately, some of our Congress people still don't seem

to understand what it means. Like me, an older woman in my social Security age range, You may

remember seeing "FICA"(?) as a deduction on your pay stub. I learned years ago that FICA meant

SS. I didn't have the understanding that it also covered payments into "Medicare." In more recent

times this information has been spelled out more clearly on pay stubs. In other words folks, these are

programs we have paid for, along with our employers who are required to match our contributions.

earning interect, so there should be a lot. We receive reinbursements in the form of SS checks when

retire to take care of my late husband, which meant I received a smaller SS checks. When we pay into

SS we also cover our disabled children and / or spouses who may have a disability, and they may also

if some of us receive more than we paid into SS, remember that our family members also p=w. into it

"play games" with our money. I don't want them to even touch mine! Some even suggest that we as

elders, have more money than we need and they want to reduce our checks in older to give the excess

to the cities for schools, roads, etc. - rather that taking fair taxes fromthe super rich.

Angry citizen
Posted by Dyer at 6:25 PM No comments:

At Ease With Our Own 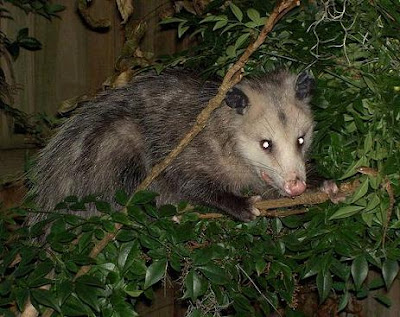 Brangler Oppossum (above) is the only thing gathering in these hills, my friends.

(Originally published, July 23rd, 2009)
If it seems some Penn Branch folk are always bellyaching about the lack of quailty retail in our neighborhood, don’t judge us too harshly. It’s more than just bellyaching. Prior to the Reagan Era 80s and the Inflation that preceded it, this neighborhood had plenty!

I remember drugstore diners with GREAT coffee, movies at the Hyland Theatre (at the Hyland Cinema, once located next to the Pope Funeral Home) and, with valet, at Coral Hill. There were even several restaurants, a cocktail lounge or two, a bowling alley, ..and all right here, in and around Penn Branch.

I remember seeing my neighbors at these places and the feeling of relaxed belonging and protection it gave me. I remember hearing my father laugh about bumping into Mr. Such N. Such at that cocktail lounge, and how, after the encounter, he’d decided that Such N. Such probably wasn’t such a bad guy, after all. I remember, in passing, seeing the broad smiles on the faces of our hardworking Penn Branch guys and ladies, sitting around the diners and bars, proud that these were our places.

At ease, with our own. The tribalism I talked about, last week.

Today, if there’s a place (besides, the Southeast White House) where *Branglers routinely gather, east of Capitol Hill’s Eastern Market and south of the Denny’s on Benning Road, for coffee, margaritas or anything else, it beats the hell outta’ me. Now, people go to Capitol Hill and Northwest for that kind of thing.

The last three and a half decades, post Civil Rights Movement, post-desegregation, post-riot, post-urbanism, post-inflation, has been rough on Penn Branch. We want commercial development and always have, ..but, not the kind that attracts people, who don’t respect or appreciate the wholesome, small-towny, slightly Cosbyesque thing we’ve got going here–the Brangler Way. If gang violence, over-crowding, loitering and the pungent fragrance of urine wafting up Carpenter Street is the price of having a cineplex and steakhouse burgers and a proper bar in the neighborhood, no thanks!

We like carefree retirees, newlyweds, families and big, goofy dogs! We like to work hard and play harder, and we would love to see Penn Branch Center reflect and indulge all of that, ..but, without making our neighborhood feel like a war zone in a Third World Country.

Not at the cost of losing everything we’ve worked so hard to build and grow here.

Not at the cost of losing our community’s unique identity. Our Penn Branch culture.

*Brangler is what the Dyers call a Penn Brancher of long-standing.
Posted by Dyer at 11:17 AM No comments: