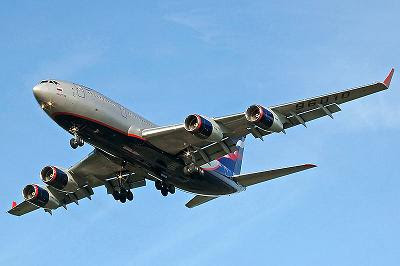 This Ilyushin Il-96 (above) isn't the alleged jumbo jet, but looked very much like this one.

At about 4:13 pm EST, I saw a white jumbo jetliner, with red markings, pull in low enough over Penn Branch to clip the treetops and dive toward Alabama Avenue in Fairfax Village! It looked like it was going to land at the strip mall, down the hill, on Pennsylvania Avenue! I can also say, with some measure of certainty, that its design identified it as a Boeing 747.

Military helicopters--Navy-commissioned, if I'm not mistaken--were seen in the air, shortly afterwards. Though I only saw one, it was admittedly hard to tell how many because of the trees, and it sounded like more than one. This might have been perfectly inconsequential, considering some kind of helicopter are seen speeding over Penn Branch, almost every half an hour and especially during rush hour.

I heard police and emergency sirens following all of that, and there is a difference. Trust me--River East hears enough police sirens to know the difference between the two.

I can't be the only person, who saw this, because that plane was just too damn big not to be noticed. If you saw it, please leave your comments below and describe this incident as well as possible AND how unusual you found it to be.

Since I didn't have my celly on me at the time, there are no pics. Sorry.

Mel Dyer
Posted by Dyer at 1:41 PM No comments: